The perfect balance of sweet from the sugar and tart from the rhubarb makes this Easy Rhubarb Crisp an irresistible spring dessert!

When I spotted the first fresh rhubarb of the season at the farmers’ market, I knew I’d make a simple rhubarb dessert. This crisp featuring seasonal rhubarb took me back to the Iowa kitchen where my mom cooked up delicious treats from our backyard rhubarb patch.

We always had a good harvest of rhubarb in our backyard when I was growing up. Rhubarb pies and sauce were some of my mom’s specialties, but I don’t remember her making a rhubarb crisp.

Crisps, crumbles, and cobblers are my go-to summer desserts as they’re super simple. It’s no fun rolling out a pie crust on a sweltering day….or any other day, as a matter of fact! These alternative fruit desserts are much easier than messing with a double-crust pie!

This rhubarb dessert is a simple, classic recipe, but I have a few tips to make the process go smoothly.

When Is Rhubarb in Season?

Though you can usually find frozen rhubarb throughout the year, fresh rhubarb’s season is April through June. A rule of thumb is to pick your rhubarb crop before the 4th of July to ensure the plant will store up enough energy to survive the winter. Note that rhubarb should be about 10-inches tall before cutting.

Raw rhubarb is extremely tart and sour, though it does mellow a bit when cooked. But it’s always combined with plenty of sugar, making it palatable in recipes.

Can Frozen Rhubarb Be Used for Baking?

Yes, you can use frozen rhubarb when it’s off-season or hard to locate in your area. There is conflicting information on exactly how to use frozen rhubarb in your recipes. Some resources say to defrost it first and drain some of the excess liquid off and others advise to use it frozen. It often depends on the recipe.
For this crisp, pies, cobblers, etc., you do not want too much juice as it can make the crust and toppings soggy. Plus you’ll want the cornstarch in the recipe to thicken up the exuded juice a bit. You may need extra cornstarch or thickener if you use defrosted rhubarb without removing the excess juice. I’d recommend thawing your rhubarb and draining off 2/3 to 3/4 of the juice. Place the frozen rhubarb in a sieve over a bowl and let it defrost. Note that I have only made this recipe with fresh rhubarb.
If you’re cooking your rhubarb for stewed rhubarb or a rhubarb sauce, using frozen rhubarb will work fine. For other baked goods, like muffins and cake, the jury is still out. I wouldn’t hesitate using frozen, undefrosted rhubarb in these recipes, though other sources worry about too much liquid forming as it bakes. Since rhubarb gets very soft after it’s frozen, I find it difficult to combine the thawed rhubarb with the thick batter.  Whatever form of rhubarb you decide to use, I think your results will be delicious!

Do Rhubarb Pies and Crisps Need to Be Refrigerated?

This rhubarb crisp will be fine sitting out at room temperature for about 24 hours. After that, the crisp topping can start to get soggy and if it’s really hot and humid, there is even the risk of mold developing after a number of days. Play it safe and park your crisp in the refrigerator the day after you bake it.
To serve, gently warm a serving in the microwave and then top with a scoop of vanilla ice cream. The warmed rhubarb crisp will taste like you’re eating it hot out of the oven. And who doesn’t love their ice cream getting a bit melty?! 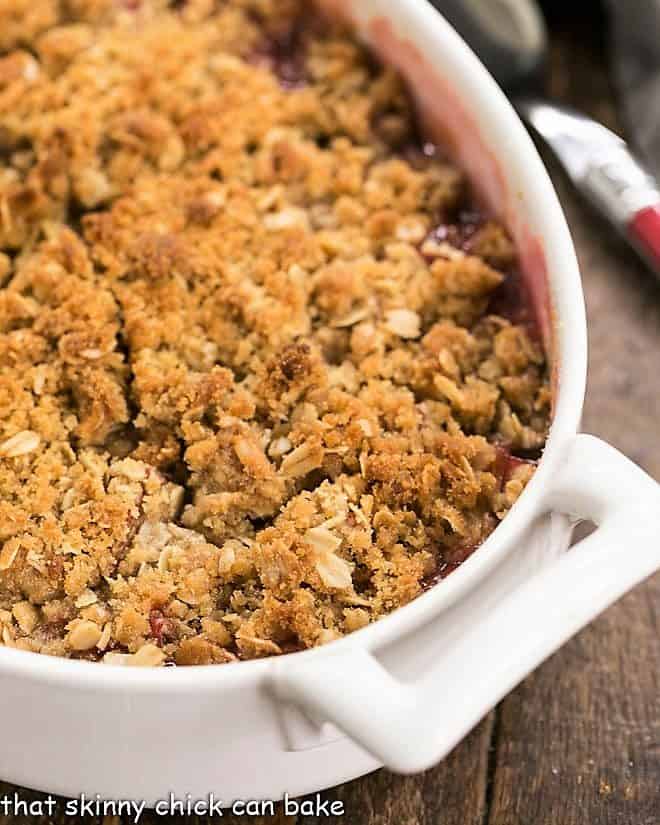 Preheat oven to 375 degrees. Grease a 2-2 1/2 quart baking dish with butter and set aside.

In a large bowl, toss the rhubarb with the sugar, cornstarch and lemon zest. Set aside.

In a medium bowl, combine the butter, brown sugar, flour and cinnamon. Pinch and squeeze the butter pieces with your fingers until the butter is the size of small peas. Add the oats and mix to combine. The mixture should be crumbly and will clump together when squeezed.

Evenly place the rhubarb in the baking dish, then crumble the topping over the rhubarb. Bake until topping is golden and filling is bubbling, about 45-50 minutes.

Serve slightly warm or at room temperature with a scoop of vanilla ice cream.

You can make the crumble using your food processor. Mix in the oats by hand.