A Brownie Baked Alaska is an exquisite twist on the classic meringue topped dessert named after Alaska was purchased by the United States in the late 1800’s.

This out of the ordinary Baked Alaska Recipe is truly a show stopper with the massive topping of toasted meringue. 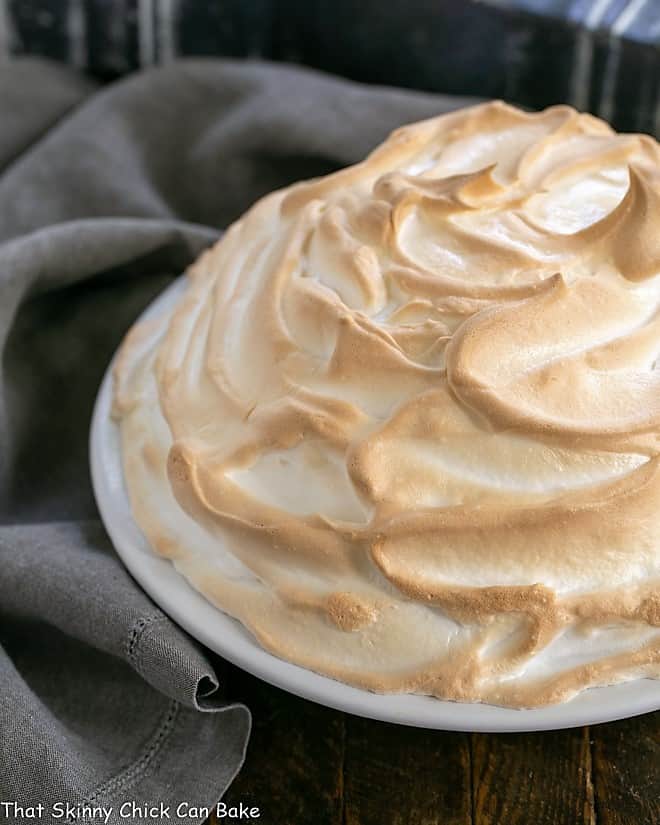 Of course, my version of this baked Alaska has a chocolate twist starting with a brownie base. I’ve always topped with vanilla ice cream, but the “vanilla” in the freezer was Graeter’s Vanilla with bittersweet chocolate pieces! Nothing wrong with more chocolate!

This baked Alaska would also be spectacular with peppermint stick, coffee, or one of your favorite ice cream flavors that pairs well with chocolate. I started with a recipe from Gourmet and made it my own.

My oldest, Tom, joked as he was eating this tonight, “This can’t be good for you.” That’s a huge compliment! 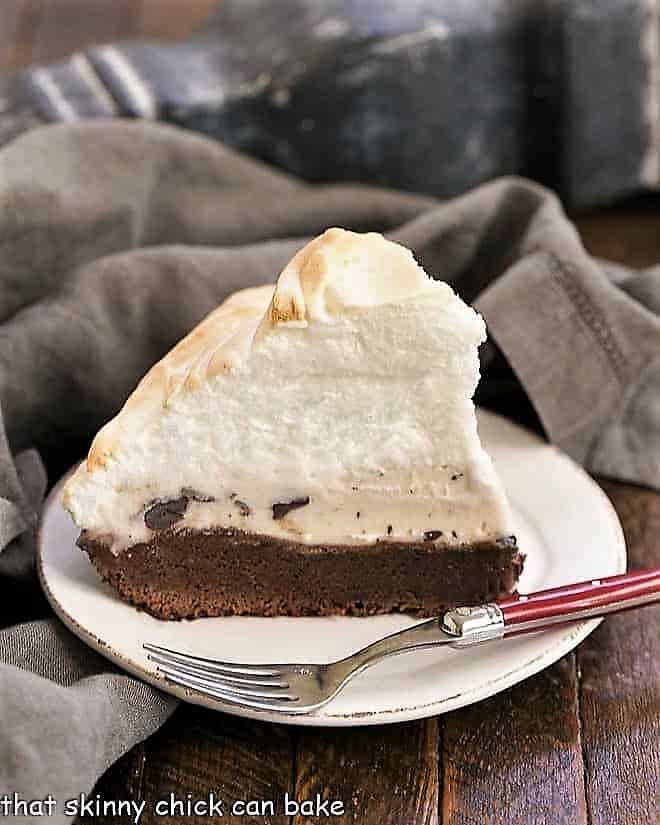 How to Make a Recipe for Baked Alaska

Instead of the typical sponge cake base, there are endless options for cake flavors or even brownies, like with my recipe. The base is made in a pie plate, though, instead of the classic round cake pan.

Like the base, the ice cream layer can vary as well. Vanilla is always appropriate, but any flavor will do as long as the flavor is complementary to the cake layer.

The meringue topping is added only after the cake and ice cream layer have been frozen for up to an hour. This prevents the ice cream from becoming a melted mess while the meringue is browning in the oven.

A huge pie of meringue topping this dessert is the classic finishing touch. The original recipe used 6 egg whites which made a massive meringue topping. Decreasing the amount to 4 egg whites still made a beautiful, fluffy mound of meringue. If you haven’t made a meringue before, there are a few tips to be successful.

PRO-Tip: Use room temperature egg whites for the most voluminous meringue.

PRO-Tip: Whipping up a meringue is an easy process, but your egg whites, beaters, and bowls have to be free from any grease, oils, or egg yolk contamination or the whites will not beat properly.

It behooves you to separate the eggs one at a time into separate dishes before adding the whites to your mixing bowl. If you don’t and get a dribble of yolk in your bowlful of whites, you’ll have to toss them all. Also, make sure your bowls, etc. have been run through the dishwasher for the best chance that they’re 100% clean.

How to Slice a Baked Alaska

Cutting through a meringue topping can be challenging. The meringue wants to stick to the knife, ripping through the meringue instead of gliding.

To help slicing, dip the knife into boiling water, drip it off, then slice through the meringue. Alternatively, take the sharp point of a knife and pierce along the line of where you plan to slice. Next, slice along that line. These “dots” provide controlled slicing. 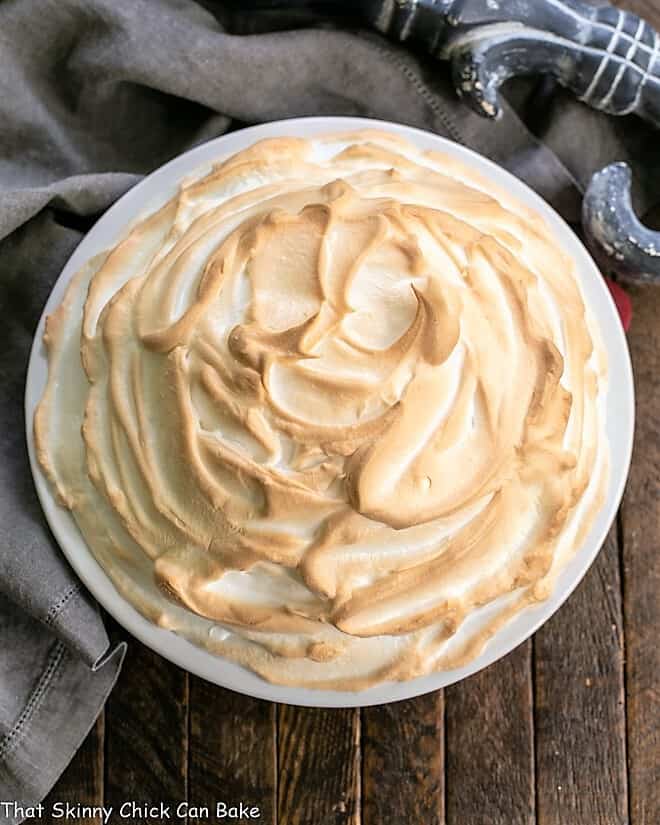 What is a Baked Alaska Made of?

Typically a baked Alaska is made of a sponge cake base, followed by an ice cream layer, and finished off with a billowy meringue topping. The bottom two layers are frozen before the whipped meringue is added and toasted briefly in the oven.

Why is This Dessert Called Baked Alaska?

Baked Alaska purportedly got its name when Charles Ranhofer, a New York chef for Delmonico’s is said to have created the dessert to commemorate Seward’s purchase of Alaska in 1867.  First called the Alaska-Florida because of the contrast between the hot and cold elements,  shortly after it was known only as Baked Alaska.

Though, Ranhofer may have been the first to coin the name, there are also there are undocumented claims that Antoine Alciatore of New Orleans ‘Antoine’s restaurant may have actually been the originator of a baked Alaska, also after the sale to the US.

This frozen dessert was not new to the world when first baked up in those two restaurants.  It was known overseas as omelette norvégienne, omelette surprise, or omelette sibérienne. If you want to douse your baked Alaska in rum and ignite, it’s then called a Bombe Alaska.

To cut through the meringue, use a hot dry knife to minimize sticking. I dip the knife in boiling water, then dry it off.

* I used my Fudgy Brownie Recipe for the base.

This recipe was originally shared in June, 2010. Recipe, photos, and text were updated in 2019.

Note: This post may contain affiliate links; view my Disclosure Policy for details. I earn a small percentage from any purchase you make by clicking on these links at no extra cost to you.
Chocolate