If you’re a fan of stuffed peppers, Dorie Greenspan’s Rice Packed Peppers with garlic, spinach and cheese will hit the spot!

A vegetarian side dish or entree, once I coerced the picky hubby to take a bite, he changed his tune on stuffed peppers! 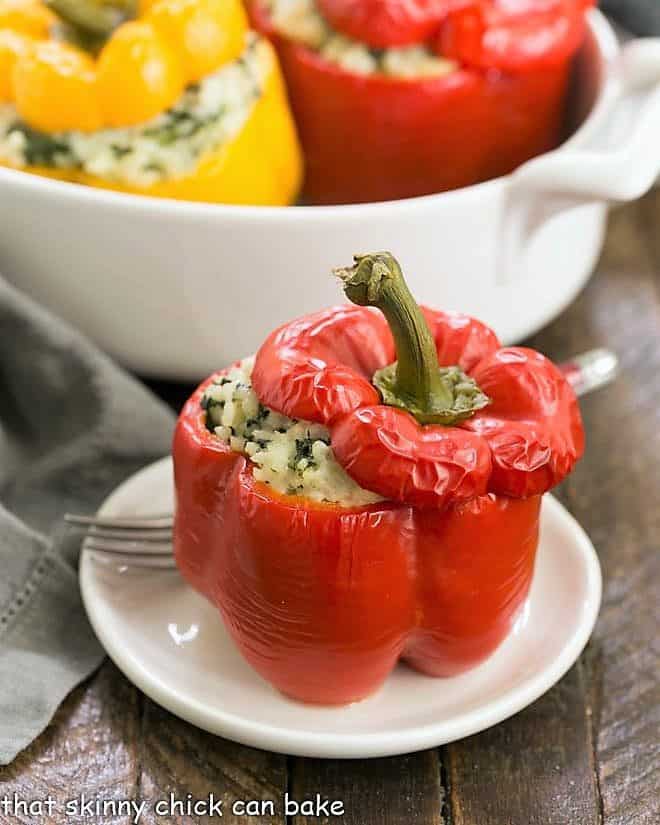 Our recipe this week for French Fridays with Dorie was a  lovely side dish called Creamy, Cheesy, Garlicky Rice with Spinach.  Doesn’t that sound delectable?  Dorie often suggests a Bonne Idée, a twist to the main recipe. And it’s frequently brilliant! I jumped at the chance to stuff some lovely bell peppers with this fabulous “almost” risotto. I picked out some jewel toned bell peppers knew they’d look as beautiful as they were destined to taste. Dorie’s rice packed peppers were phenomenal! 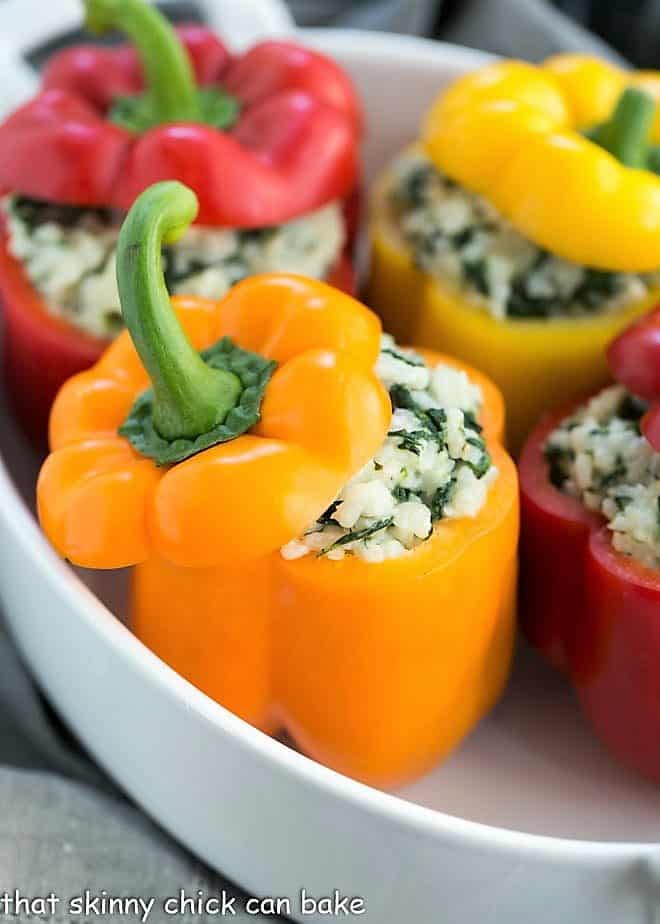 How to Make the Pepper Filling

I made Dorie Greenspan’s stuffed peppers recipe for the first time while my dad was visiting back in 2010. I think the last time I ate stuffed peppers was my mom’s version with rice and ground beef, which he always adored.  So I knew he would appreciate these.  In fact, he asked more than once if they were ready to eat, especially after I gave him a sample of the filling composed of Arborio rice, spinach, onion, garlic, Gruyère, and cream.

The rice was made by bringing it and chicken broth to a boil, reducing the heat, and allowing it to cook and simmer with the lid on.  The addition of cream gave the illusion of risotto without all the babysitting involved with the traditional technique. Then mixed with onions, garlic, spinach and cheese, the delicious filling was ready to be packed into vibrant fresh bell peppers and popped into the oven.

These pepper were marvelous, even the picky spouse agreed, but he needed to be coerced to take an initial bite. You know I don’t like stuffed peppers, he griped. But you love sausage and peppers, fajitas and other dishes with cooked peppers was my logical response. Truthfully, I think he was most worried since these were the entree, not a side dish. Thank goodness I was convincing as he ate every single bite! 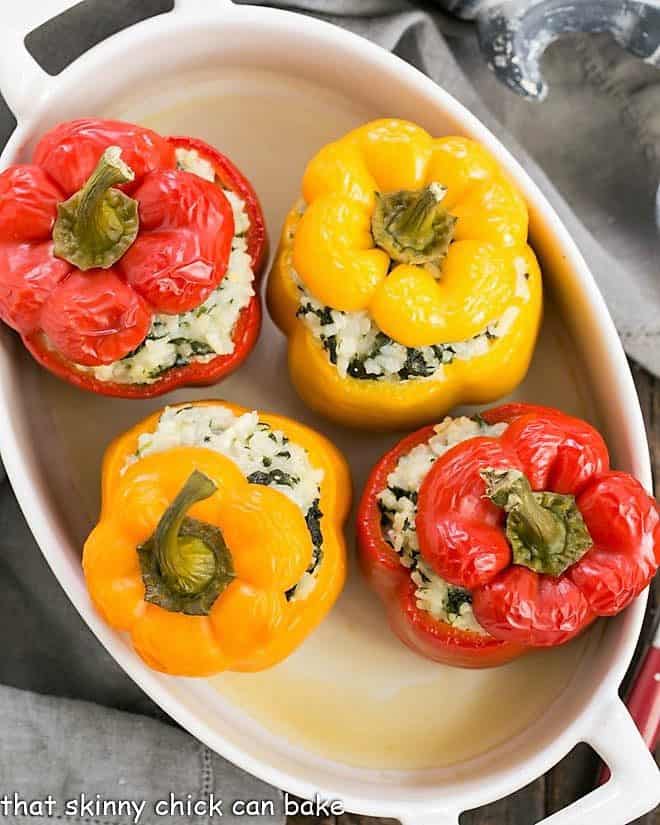 Tips for Making the Stuffed Peppers

These Rice Packed Peppers were made with rice, duh! But other grains can be used. Other cheeses can be used. Herbs can be added to the mix. The options are endless. Here are a few tips for making terrific stuffed peppers.

This recipe can be found in Around My French Table by Dorie Greenspan.

If you love peppers, here are some more delicious pepper-centered recipes to try. These Taco Stuffed Peppers from Wine and Glue are easy enough for a busy weeknight. Kalyn’s Kitchen shared Ten Low-Carb Stuffed Peppers and how about this Feta Stuffed Red Bell Peppers appetizer from Give Recipe? 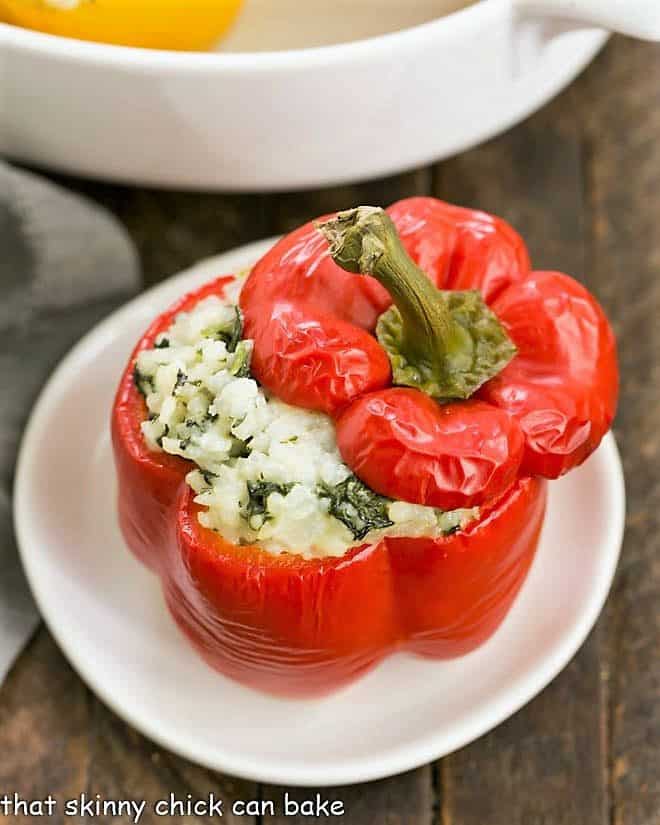 This 2011 “Rice Packed Peppers” post was updated with new photos and text. 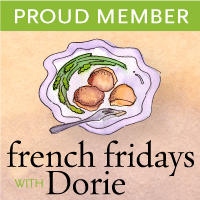 In a medium saucepan, bring the broth to a boil. Stir in the rice and cover. Reduce the heat to a simmer and cook until the broth is almost all absorbed, and the rice is almost cooked. Turn off the heat and allow the rice to finish cooking on the burner.

Add the rice to the spinach mixture, then the cheese and cream. Season to taste with salt and pepper, and stir until everything is well combined. If the rice looks too dry, add a bit more cream.

Prepare the peppers by cutting off the tops and removing the seeds and ribs. Place in a greased casserole dish that will fit them snugly. Divide the rice between the peppers, replace the tops, then pour 1/2 cup of water into the dish.

Use your favorite Swiss cheese. I used a mixture of Gruyere and Emmenthal

Note: This post may contain affiliate links; view my Disclosure Policy for details. I earn a small percentage from any purchase you make by clicking on these links at no extra cost to you.
Entrees Meatless Sides