Nectarine Cinnamon Rolls: a twist on the classic cinnamon buns with diced nectarines rolled up with the sweet cinnamon filling! Perfect for a special summer breakfast or brunch! 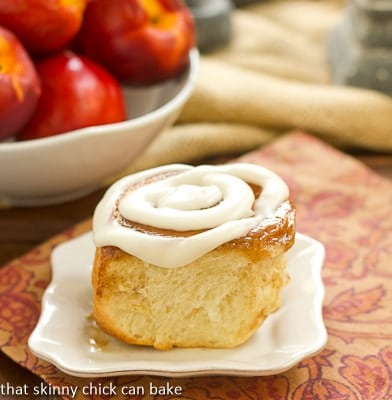 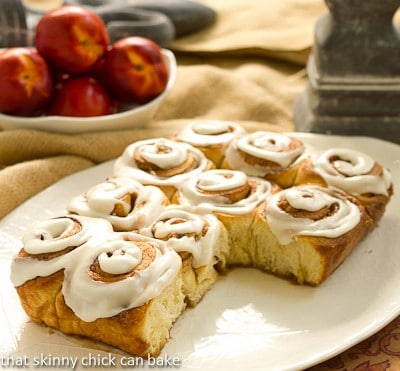 I grew up in a small, central Iowa college town…a safe, drama-free community smack dab in the cornfields of the Midwest. Well, no major drama until my dad decided to move us to Canada for a year. Harumph…not the news a high school junior wanted to hear. But we packed up the house and trekked halfway across the continent to the west coast of British Columbia where my dad took a year-long sabbatical at UBC. Vancouver seemed to have some perks…shopping, mountains, beaches, ski slopes, cute boys…it wasn’t so bad after all. Now what does this have to do with Nectarine Cinnamon Rolls? Read on…

We lived quite close to the campus…and my sister and I would jog along the forested paths on the university property. And I’d gather at the UBC library with friends to study for our biology tests. But no one ever told me about the famous UBC cinnamon buns…till many years later. I found a clipping from the paperback in Iowa entitled: UBC Buns: at last, the secret’s out. I’d been meaning to try this recipe for years, and I finally took the yellowed article home with me after our last visit. 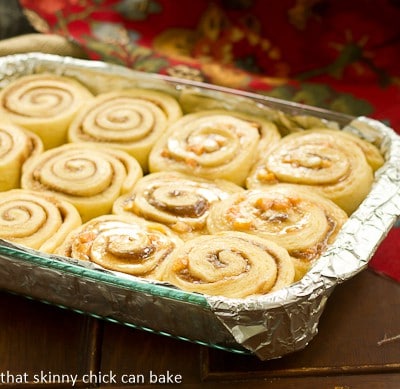 The concept was good, but the recipe fell short. The buns were a little on the dry side…and a bit flat on flavor. More salt, more cinnamon…and definitely frosting would have improved these. So back to the recipe box. This time I added diced nectarines to our favorite Cook’s Country Cinnamon Rolls. Well….to half the batch…you loyal readers know my family. The dough was buttery and pliant. Filled with brown sugar, cinnamon and fruit….they puffed up to perfection. The brown sugar caramelized…and the scent of cinnamon filled the kitchen. These Nectarine Cinnamon Rolls were soft and tender…and those with the nectarine pieces were even gooier…insanely good.

Nectarine Cinnamon Rolls from That Skinny Chick Can Bake

Nectarine Raspberry Bread from A Handful of Everything

Total time does not include proofing time.

Note: This post may contain affiliate links; view my Disclosure Policy for details. I earn a small percentage from any purchase you make by clicking on these links at no extra cost to you.
Bread Breakfast Brunch